Before the pandemic, SD-WAN was primarily marketed to enterprises to reduce costs and improve flexibility. As businesses realized the pressure to go digital, cloud applications became the foundation for most organizations, enhancing their productivity and collaboration. What eventually evolved into an absolute necessity was to run these essential applications more efficiently, on a more reliable network -which is why SDWAN has become one of the most successful networking functions in decades. What will further fuel this adoption is the recent shift to a mostly remote or hybrid workforce model. According to a report by IDG Research Services and Masergy, over 90% of organizations expect to adopt an SDWAN solution eventually.

For businesses, Managed SDWAN Services provide attractive opportunities to tap into the growing SDWAN market and create new revenue streams. As per Markets and Markets Research, the global SD-WAN market size is expected to grow from USD 1.9 billion in 2020 to USD 8.4 billion by 2025, at a CAGR of 34.5% during the forecast period.

But businesses can seize this opportunity only if they fulfill their customer needs on
time – by quickly activating the SD-WAN services. Potential roadblocks such as validating network compatibility, managing the service across multiple platforms, and solving the integration, operational and process-centric challenges can significantly delay the order to activate journey – leading to revenue loss and missed opportunities.


To accelerate the entire Order-to-Activate journey, businesses must eliminate process inefficiencies and embrace automation and digitalization at various levels.

To accelerate the entire order to activate journey, businesses must eliminate process inefficiencies and embrace automation and digitalization at various levels. This also means building a holistic tool that enables consolidating and automating workflows to achieve touchless SDWAN configuration, provisioning, and activation.

Service providers across the globe are at various stages in their journey to embrace robotic process automation (RPA) to increase their operational efficiency. But scaling RPA and making it an organization-wide success is a big challenge. As per Deloitte’s Global Robotics Report 2018, over 80% of organizations implementing RPA were happy with the results, but only 1% of them could scale considerably in the past 1 year (50+ bots in a year).

The inability to identify appropriate use cases after initial implementations are the major bottleneck for service providers. The lack of end-to-end visibility of the process by the siloed business units further adds to this plight.

Service providers must explore various methodologies to create a steady process pipeline that can be automated. These techniques are – comprehensive analysis, design thinking workshop, and process mining. 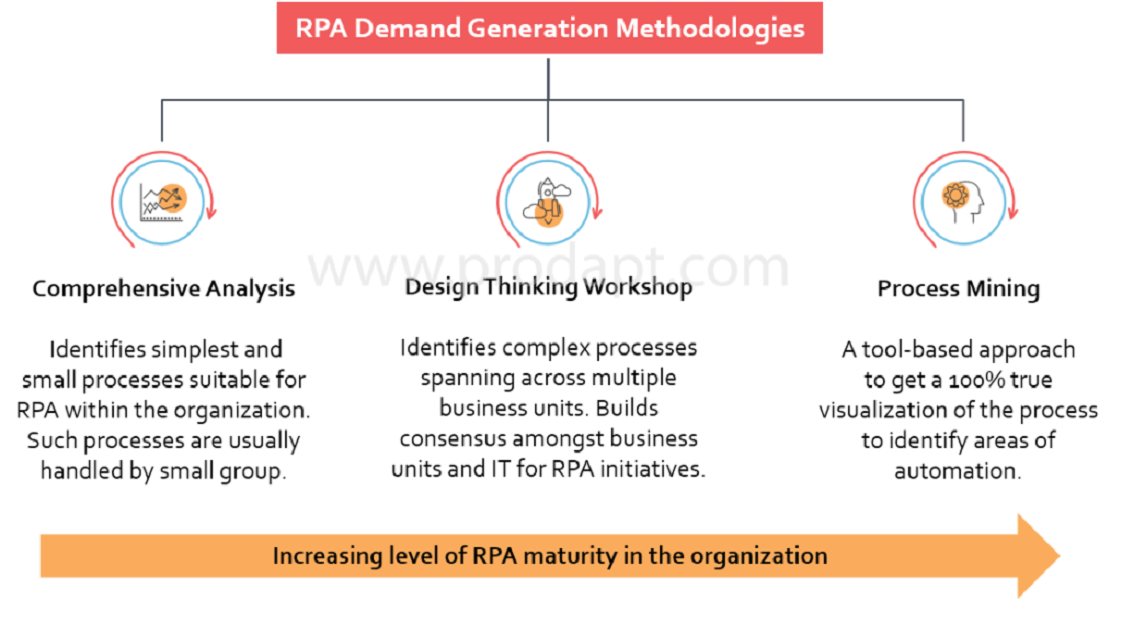 Download the Insight to learn about the techniques in detail and learn how to choose the correct method as per your organization’s maturity stage.


As per Deloitte, 80% of organizations implementing RPA were happy with the results, but only 1% of them were able to scale considerably in the next 1 year

Modern business cannot afford the conflict between the urgent need to manage a dynamic situation and the strategic need to build for the future.

In today’s new-age markets, every major business is tech driven and, data is its backbone. Its IT success depends on its ability to develop, test, and deploy features (or products if you’re a pure tech player) at scale and at a faster rate than competitors. The speed at which changes roll out should match customer expectations, else you risk irrelevance.

For example, a business rolling out new products must contend with the constant tussle between the development side, which writes software, and those who run it. DevOps principles seem to alleviate the situation, as they spell out a way to harmonize the two silos. Perhaps your company has crossed this bridge.

But this perfect picture may not match your reality. Incidents and downtime may undermine the DevOps effort, forcing resources to manage them. A meltdown of IT Operations (ITOps) can bring development to a dramatic halt; or many small ones can bleed your operations to a state of stagnation. 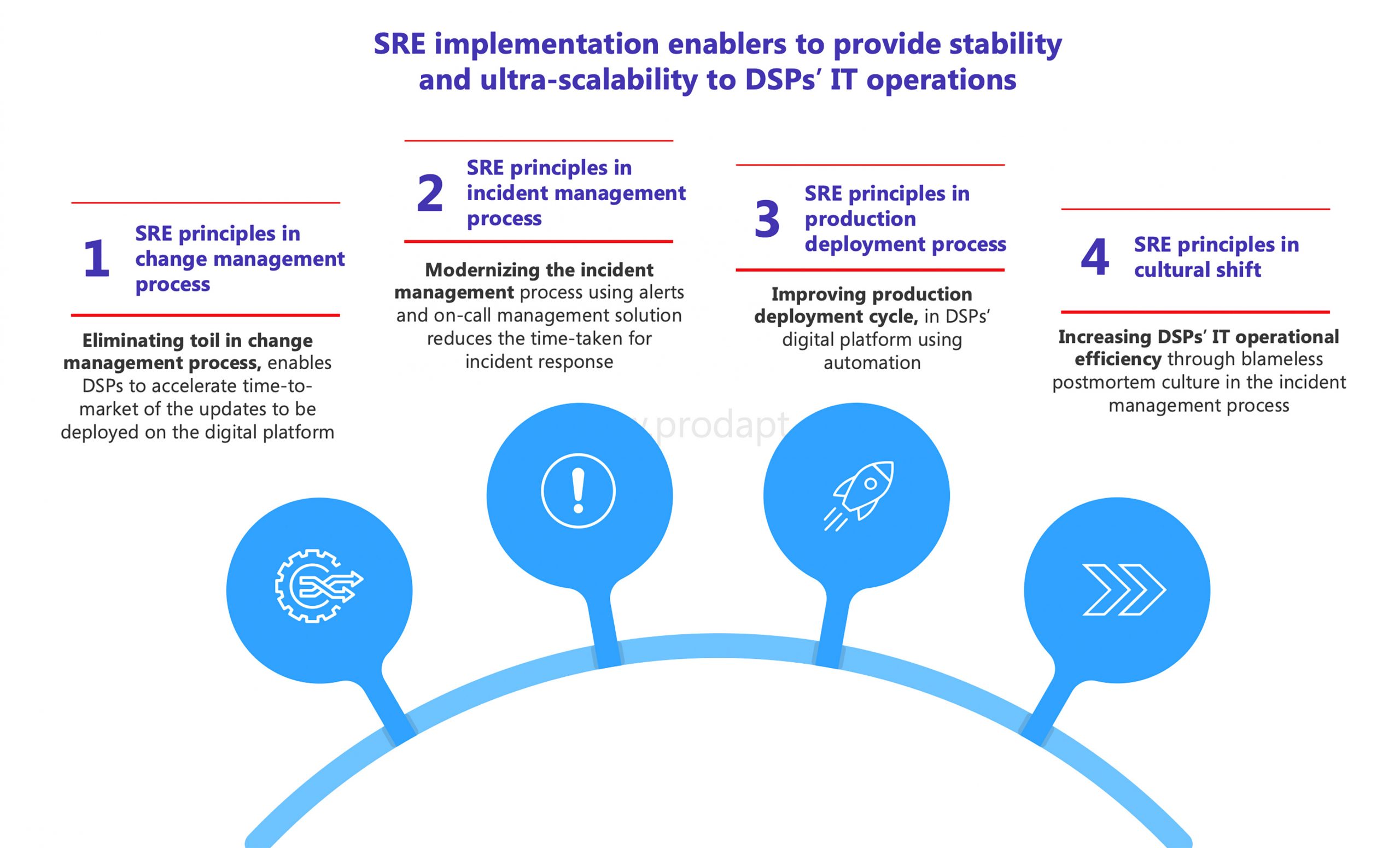 SRE effectively ends the age-old battle between development and operations.

The answer is Site Reliability Engineering (SRE) principles, which is a prescriptive way of implementing DevOps. SRE creates a playbook that streamlines ITOps and shields people from critical situations, while those are being handled.

Development teams can focus on feature development instead of achieving and maintaining service levels in the form of incidents and uptimes, thereby improving the reliability of the business-critical operation.

Leverage MLOps to scale and realize the ML use cases faster

Most businesses in the ‘Connectedness’ industry have started embracing Machine Learning (ML) technology to provide effective customer service to the customers. However, managing these ML projects and putting them into action is challenging. For service providers who strive to move beyond ideation and embed ML into their business processes, Machine Learning Operations (MLOps) will be a game-changer. According to Gartner, “Launching ML pilots is deceptively easy but deploying them into production is notoriously challenging”. Listed below are a few challenges that make it hard to scale ML initiatives.

Service providers need to implement the MLOps approach to overcome these challenges, which automates and monitors the entire machine learning life cycle. It enables consistent improvement in the baseline accuracy and accelerates the production time of ML models.


Launching ML pilots is deceptively easy but deploying them into production is notoriously challenging.

The successful implementation of the MLOps approach requires the right set of enablers such as de-coupled architecture, standard change management process, automated retraining and deployment of ML models, and continuous monitoring.